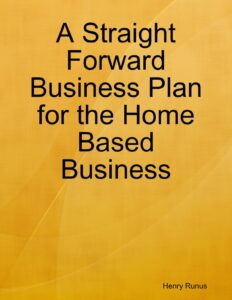 The prospect of working from home has gained credibility over the years. Home offices can now compete with small commercial businesses and save on rent in the process. It may also be possible to tax deduct some of your home expenses while running a home based business. Faxes, high speed internet connections, dedicated home telephone lines, and cell phones help to make a home-based business a reality. Earlier home businesses had been where families lived on the second floor of their house while converting the first floor into a store, where upon close of business they would secure the first floor and retire to the upper floors. This type of home business is still done in some rural areas. Many home businesses are started off in a much smaller capacity whilst the owner is still employed elsewhere, and then expanded once they are proven to be profitable.

The concept of home-based business, as opposed to the previous terminology of “cottage industry”, first appeared in 1978. The phrase was coined by Marion Behr, the originator of a study to find out what businesses women throughout America were carrying on in their homes. The preview edition of Enterprising Women wrote about the search to gather information pertaining to home workers throughout the nation. Numerous magazines and organizations helped to disseminate information regarding the study. Ultimately 40,000 letters were received, many indicating the problems the respondents experienced while carrying on businesses from their homes.

The problems were analyzed and confronted in two ways. In 1980 the National Alliance of Homebased Businesswomen was founded to combat the isolation expressed by the respondents as well as to fight the laws which made conducting their businesses difficult. Then Women Working Home: The Homebased Guide and Directory by Marion Behr and Wendy Lazar was published. It contained the stories of many women who ran home-based businesses throughout the country in many diverse fields, as well as information on business formation, conduct and compliance with the law. It sold 50,000 copies. During this time many national magazines wrote about these issues. At the White House Conference on Small Business in 1986, one of the major resolutions was a recommendation favoring lifting restrictions on home-based business.

The number of home businesses continues to grow due to the increases in technology. In Great Britain, 8 million people were running an online home-based business as of April 2013.

Licensing requirements for home-based businesses in the United States vary based on industry and location.

A home based business is typically defined by being a group of workers who perform specialized tasks under one company name, for the purpose of earning a profit. In today’s economy, many home-based business opportunities that were once considered not for profit companies are now reaping the benefits of being profitable businesses that are attractive to both employees and employers. For example, many online classes, such as internet marketing or online classes that provide instruction in computer programming or web design are now run by home business owners who receive residual income in the form of online classes. Similarly, many retail companies now offer drop shipping and wholesale services, which allow businesses to sell items by the product without having to stock the items in their stores. While drop shipping and wholesale businesses require much more start-up capital than traditional businesses, they often generate greater profits because they have no inventory to keep on hand and no rent to pay.

Home businesses, by nature, require much less start-up overhead than most other businesses. Often these businesses can be launched from one’s home, using only a telephone, a computer, a word processor, and a fax machine. Many also take the form of a franchise, with the owner selling the rights to use his or her name in a specific location and on a specific ecommerce site. While many ecommerce sites have begun to offer an online catalog of items for sale, it is still possible to start a home business that sells its own products. Ecommerce site owners often provide customer services, such as answering customer questions about the products or services that are featured on their ecommerce site.

What Kind Of Business Is Considered A Startup Company?

Image by/from Vc20 A startup or start-up is a company or project undertaken by an entrepreneur to seek, …

How To Start A Business With No Money

How to start a business with no money? For many people it is easier said than done. Some …